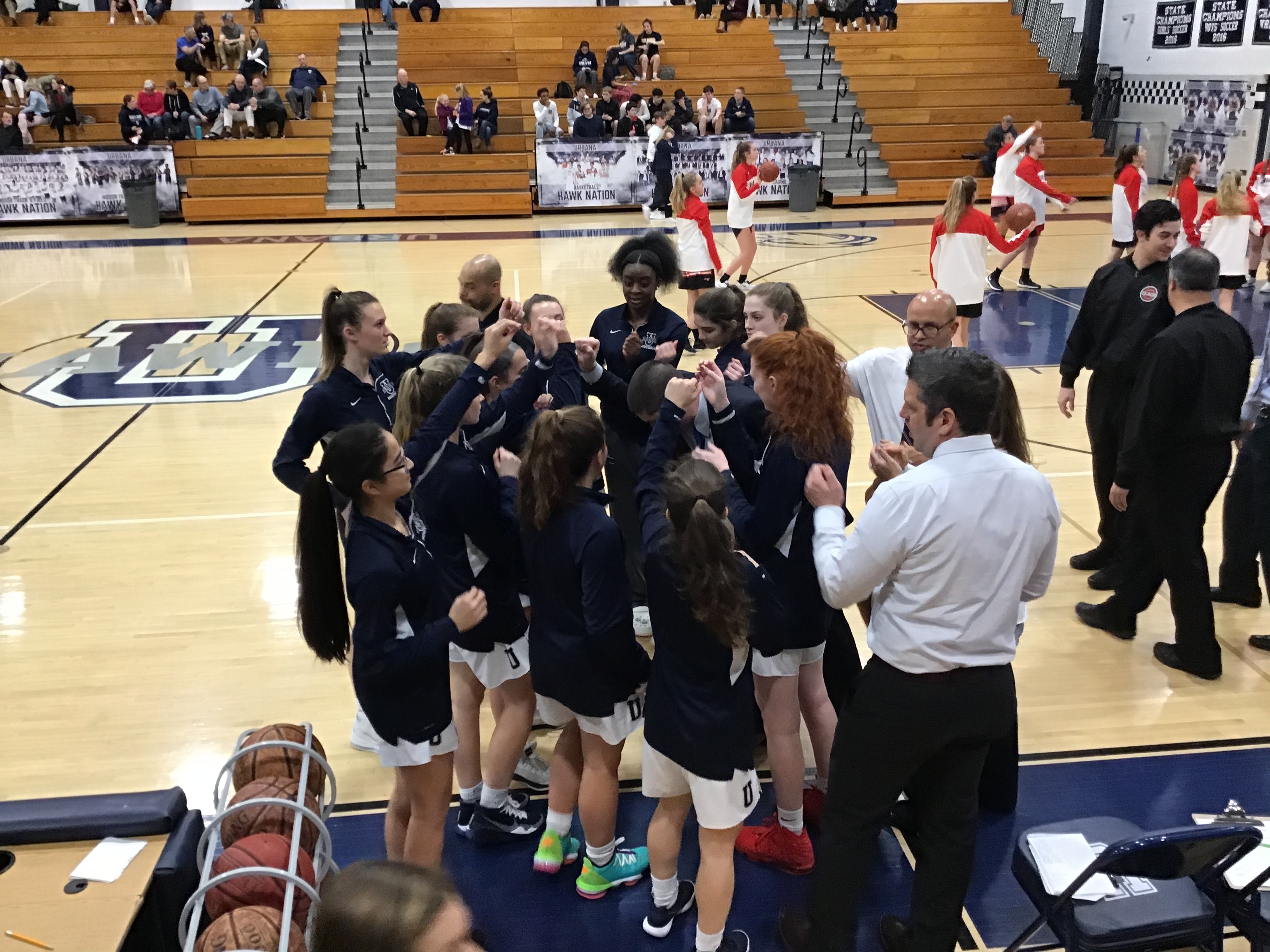 Tuesday night, in what is annually the season’s most highly anticipated matchup between two longtime rivals, Urbana defeated Linganore 46-42 before over 200 fans of all ages. It was a game that boiled down to “defense” and “runs”, both exemplified at its finest by your Hawks.
The first half started off at a quick pace by both sides, it looking like the game could be a high scoring affair. Megan Degrouchy and Hannah Miles continued their hot scoring streaks in the first quarter, combining for 10 of the team’s 12 points. Linganore, however, was keeping up and held a 16-12 lead after one. But it was toward the end of that first quarter, and the start of the second quarter, that Urbana would clamp down on DEFENSE while igniting the first of two critical RUNS. Down 16-10, the girls would outscore the Lancers 13-0, getting scoring contributions from Miles, Degrouchy, Shuttlewood and Orens. Defensively, Megan would leverage the length of her arms for a series of blocked shots that would continue on through the end of the game. Urbana struggled on the boards for much of the evening, so the blocks were especially valuable in this game. By halftime, down 28-27, we had a great game on our hands!
The second half didn’t start off so well for UHS. Linganore came out with the greater intensity, putting the ball in the hands of #33 for a stretch that would give them a 36-29 lead. It appeared the game might be slipping away for Urbana. THEN, RUN #2! Once again, the Hawks showed what they are capable of every night, every quarter. Megan continued to keep the Lancer shots from reaching the rim, and hitting a couple of key baskets, and 6 Hawks decided to jump in on the scoring, so the Lancers never knew who would hit them next! Before you knew it, halfway into the fourth quarter, UHS had outscored Linganore 15-0 to take back the lead 44-36! The final minutes focused on steady play, no turnovers, and defend, defend, defend. Game over!
Scoring summary:
Hannah Miles, 20 points
Megan Degrouchy, 8
Hannah Orens, 7
Brianna Shuttlewood, 5
Emma McCaskill, 3
Jadelyn Coleman, 2
Jordyn Keller, 1