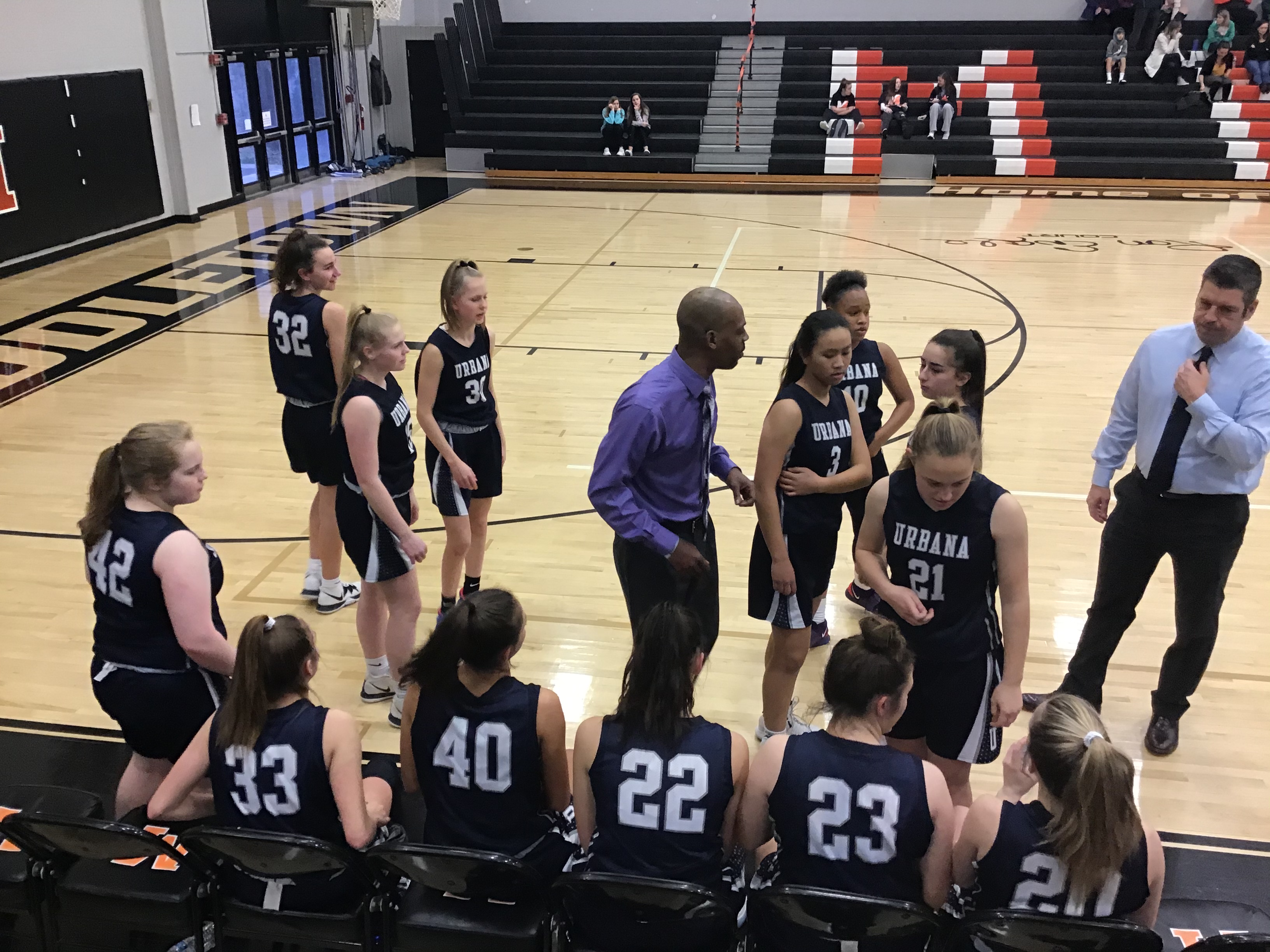 This game had so much meaning to it. On the one hand, the one-loss Hawks were set to face the season’s greatest test in 20-0 Middletown. Urbana had been riding a 12 game winning streak dating back to a loss at Walkersville, and hadn’t really been challenged outside of the 2 games against Linganore. Secondly, last night being Senior Night at a standing room only gym at MHS, a victory would silence the crowd and give the Varsity Hawks an added boost going into their game. And it looked like all that was going to happen, but alas, the basketball gods weren’t having any of that and Middletown escaped with a 41-35 win that got the crowd on its feet and pumped up Saylor and friends on the sidelines! It sure was an exciting 28 minutes of hoops!
The breakdown:
Urbana started really cold, just like the gym itself was freezing! Turnover after turnover for both teams did not reflect their impressive records. MHS jumped out to 5-0 and 11-5 leads before Coach Spriggs called for time to settle the girls down. At this point only Cassidy and Elizabeth had one basket each. The timeout gave AnPhi Le enough time to score before the buzzer and close the gap to 4.
Middletown is led by 2 scorers at the guard positions, #10 and #5. #10 was doing her thing heading into the second quarter, and leading the Knights to a 10 point lead at 17-7. Enter Sarah Metz. Assigned to guard #5, she held her scoreless for the first 3 quarters, while also scoring 9 of the Hawk’s 13 2nd quarter points, including 5 for 5 from the line. This brought Urbana and HawkNation back into the game, and set up Elizabeth Elliott for a final bucket before the half ended, URBANA up 20-19!
The halftime break clearly “chilled” both teams as a TOTAL of only 2 baskets were made! Everybody was cold, however the Hawks defense had a lot to do with that. Their guards couldn’t shake Sarah, Cassidy, Armada and Kaitlyn free, and weren’t getting any of their accustomed looks. Our bigs were making it difficult to drive to the basket as well. Urbana led 26-21 after 3. Looking real good at this point?
Then, the unthinkable! Our season-long stellar defense just vanished. Middletown scored 20 in the fourth quarter alone! Hawks hadn’t allowed anywhere near that in the final stretch. What happened? Well, the other team figured out how to get the Hawks to switch off the defenders, and #5 finally busted loose with Metz covering someone else. She started dropping 3 bombs and all the Hawks remained cold, minus Cassidy, who kept Urbana clinging to a lead with timely and huge scores! So, with 1:14 left, Urbana possession, up 34-32, the crucial home stretch was here…..Urbana would turn the ball over 3 times in a 21 second span, #5 went off for another 3 pointer, 2 free throws, grab a 37-34 lead, game, set and match. So painful, but great fun for basketball fans.
One final game remains in a remarkable season. Oakdale Bears, here we come!
Scoring summary:
Cassidy Irish, 14 points
Sarah Metz, 9
Elizabeth Elliott, 8
AnPhi Le, 2
Ayva LeVow, 2