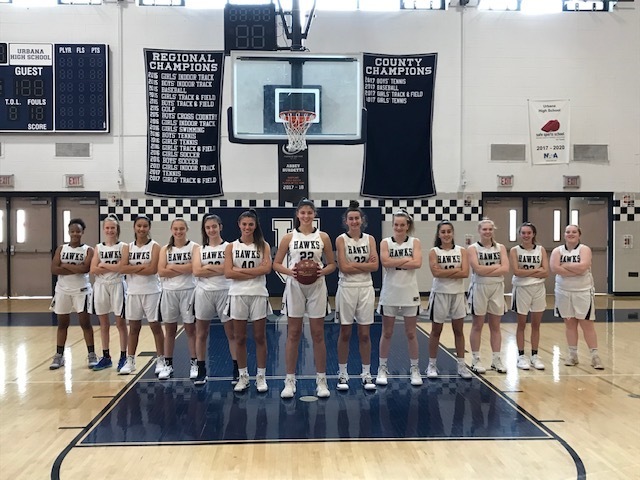 The JV Hawks knew they’d be facing a tough Cadets team tonight at Urbana. Playing Frederick always provides the motivation the team needs. Tonight, they got some extra motivation, no less from the Varsity Cadets, who constantly yelled out false 30 second clock chants from the stands to throw our girls off. So after a tight first half of play, and the chants never before seen by actual players, only crowds, the Hawks came out in the second half determined to put the game away! A 3rd quarter outburst of 18 points, and a 2nd half 30-14 margin gave the Hawks a 45-28 victory and improved their impeccable record to 13-1.
This night Urbana really displayed their inside game strength. On the backs of Reagan McMahon and Elizabeth Elliott, the Urbana bigs would drop 7 buckets over the Cadets, while the rest of the roster would wiggle their way into the lane for layups and short rangers. Matter of fact, Urbana’s only two baskets outside of the lane would come from AnPhi Le and this season’s leading 3-point artist Cassidy Irish, who each hit one.
Armada Barnes delivered a couple of artful assists to open the second half and Sarah Metz continued to be a “Clausen-like” hustler all over the court. Terrific ballgame ladies. On to face the Hubs!
Scoring summary:
Elizabeth Elliott, 9 points
Reagan McMahon, 8
Sarah Metz, 8
Paige Shaver, 4
Kaitlyn McNerney, 3
Cassidy Irish, 3
AnPhi Le, 3
Rachael Sutton, 3
Armada Barnes, 2
Katie Peterson, 2