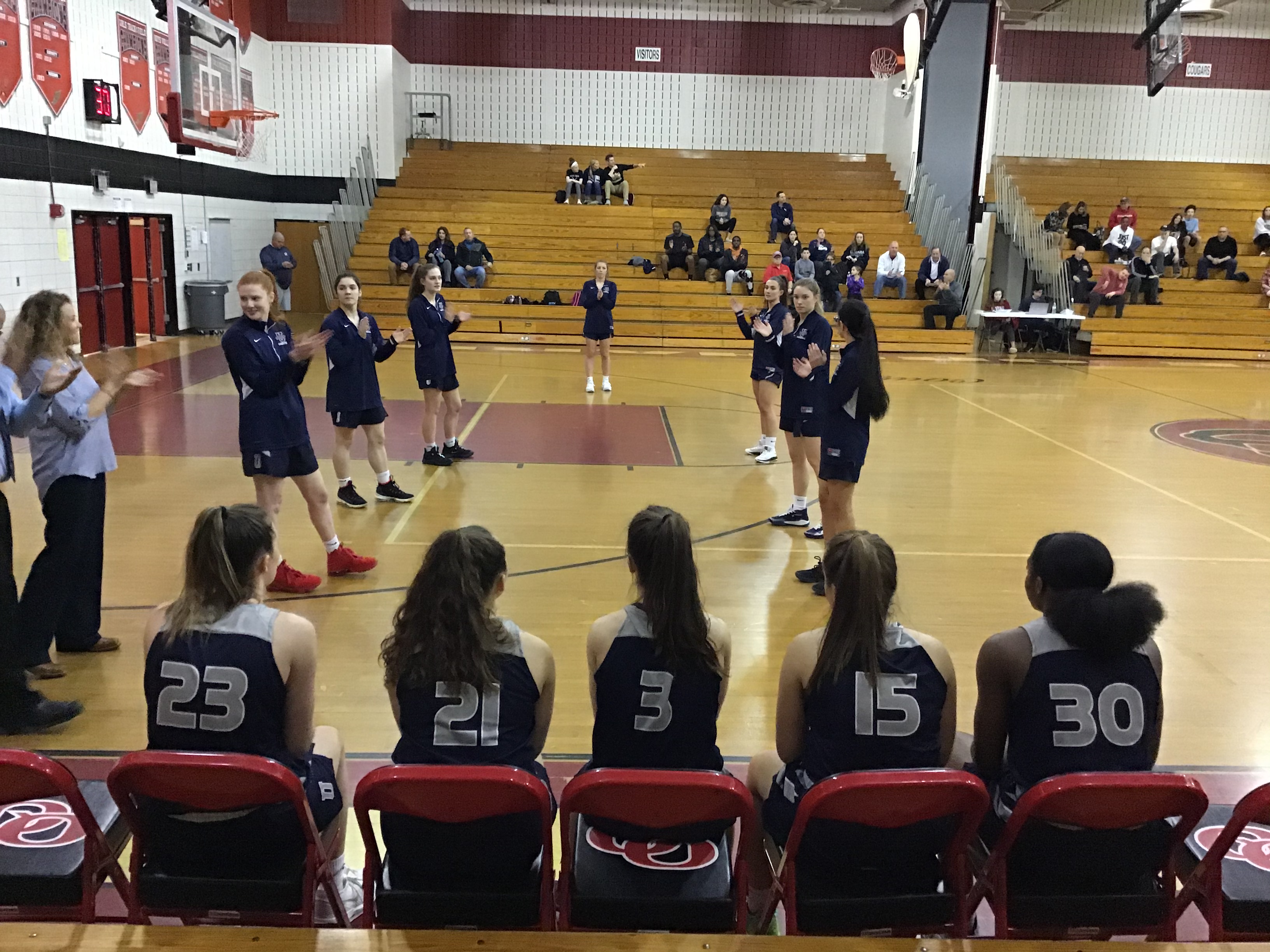 It was the GOY, no doubt, in either FredCo or MontCo, in a state playoff game no less, that you had to be there for to fully appreciate. Urbana girls visited nearby Quince Orchard last night with everything on the line. Win and advance or lose and go home. In an electric and loud atmosphere, in a game that truly went back and forth, the #2 Cougars escaped our #3 Hawks with a 52-51 decision that left so many of us emotionally drained and especially sad to see the season come to an end.
Here is how it unfolded:
The Hawks gave up the first 5 points early, only for the girls to respond quickly and across the lineup. Carmen, HannahM, HannahO, Megan, Sascha, Brianna! THESE GIRLS CAME TO PLAY! Each of them scored to stay in striking distance, 18-15 at the end of the 1st. Both teams were hitting, turnovers were kept to a minimum, and we were seeing great basketball! The only concern for Urbana were the high number of offensive rebounds and multiple shots per possession the Cougars were getting from their strong frontline.
The 2nd quarter was a complete reversal of fortune for UHS. Defense took over, the Hawks holding QO scoreless for most of the period, while the girls continued to pour in points evenly across the roster. By the time Urbana was ready to widen our lead, the Cougars managed a pair of baskets to keep it at 27-22 UHS at the half. QO still had rebounding success, Urbana got a little careless protecting the ball near the end of the period, but more importantly, Kweti would be saddled with her 3rd foul. It had been clear QO was concerned about 2 things: Keeping Miles under wraps and drawing fouls on Kweti. Still, LOOKING GOOD!
3rd quarter UHS extended the lead to 6 right away, which would be our largest of the game. Then several Cougars went to work hitting down low, midrange and long ones for a big 17 points and lead at 39-37 after 3. Meanwhile, Urbana shots were not falling. We managed 4 buckets over the 8 minutes, and were possibly seeing signs of fatigue as free throws started to miss often. This would haunt us later too. On the upside, more calls were going our way, as several of the QO bigs were in serious foul trouble!
The final quarter was unreal! QO extended the lead early on to their largest at 47-41. It just seemed like UHS might have finally run out of gas. #3 for the Cougars began to light us up. URBANA NOT DONE YET! Carmen was cleaning up the boards and put back 2 for buckets, HannahM contributed 4, Brianna 2, and Emma got physical and went into beast-mode commanding rebounds, tying up for jumps and hitting huge baskets to give UHS a tie and then lead at 51-49! EMMA CAME TO PLAY! It was insanity! Each side of the gym screaming with each of their team’s runs! Throughout the game coaches on both sides calling timeout at crucial moments, and every time the timeouts stopped the bleeding!
And then, oh the agony…..less than a minute to go, a Cougar 3-ball has them up 52-51! The final 45 seconds must have taken 15 minutes to complete. Missed shots and fouls would ensue, even a premature celebration by QO when game was still in doubt. 19 seconds a surprising foul by QO puts UHS at the line for a one-and-one. Miss! Foul UHS. Another Foul UHS, puts QO at line for one-and-one. Miss! Another surprising foul by QO with 7 seconds left! Another UHS one-and-one. Miss! Another UHS foul. 6 seconds. Another Cougar one-and-one miss! Hannah rushes the rebound up court in final 5 seconds to get off a pass for a final shot, but the buzzer sounds, game, season over. Excruciating! Best $6 ticket ever for a basketball game! Incredible efforts and play by both teams and great to witness the girls put it all together after a long season and compete like that! Greatness cannot be achieved without an experience like this. The greatest have all been here. This team is great!
Scoring summary:
Hannah Miles, 13 points
Carmen Kweti, 10
Hannah Orens, 8
Brianna Shuttlewood, 7
Emma McCaskill, 5
Megan Degrouchy, 4
Sascha Bravin, 4

Thank you ladies for an enjoyable and winning season.