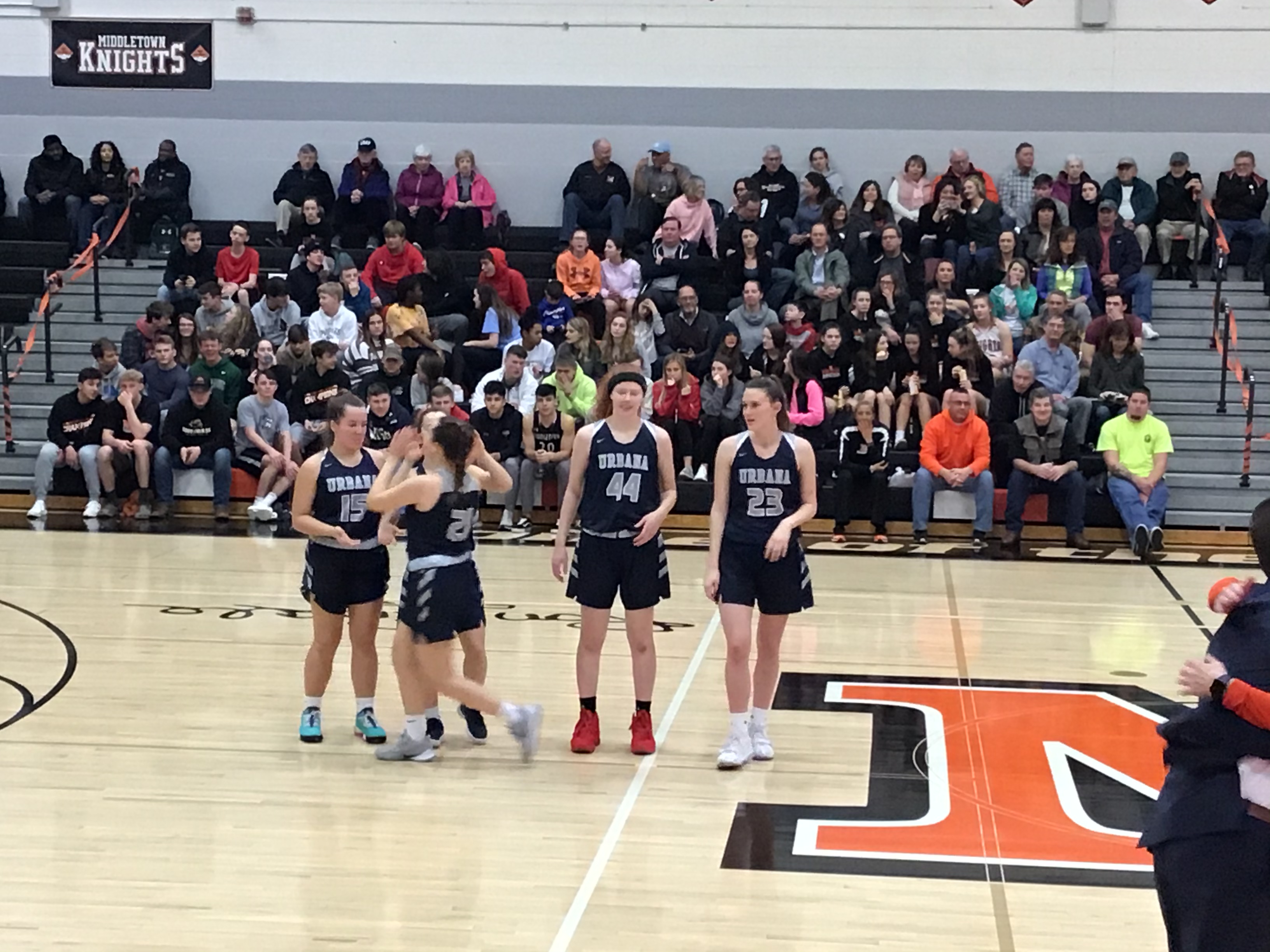 The Hawks had quite a challenge ahead of them before even arriving at Middletown HS last night. Down their 2 leading scorers and defenders due to injury, and facing the conference leading Knights with their 20-1 record and 5 star recruit, fans knew in order to have a chance the girls would have to play near-perfect to pull off an upset. Once the teams lined up for the jump ball, it became apparent the hill would be even higher to climb. Middletown was taller and longer at every position, and as the game progressed, the Hawks discovered they could run with us too. Ultimately, the Knight’s game strategy would take advantage of their height and they pounded the ball inside all evening in a 69-48 win over Urbana.
The first quarter saw the Hawks get out to a good start. Megan found her stroke early, Emma showed she is automatic from 10-12 feet, and HannahM hit her first 2 points of a game high 12, while the Knights struggled from beyond the arc. By the end of the quarter Middletown began scoring down low, and Urbana trailed 16-11 in a competitive game.
The second quarter MHS began to show their might, and Urbana would go cold, only managing 3 baskets in Q2 and and 3 in Q3. The Hawks defense had no answers for how to stop Middletown, as they pulled away for good behind balanced scoring and a patient attack. Of note over the first 3 quarters is how many short “floaters” Urbana just missed. These have been so reliable all season long. It may have been the result of having to toss them a little higher than usual over the outstretched arms of the Middletown girls.
The final quarter both teams just opened things up and they combined for 42 points as Urbana held their own, outscoring the opposition 22-20. The quarter featured Miles finally heating up for 3 3-pointers, and Voorhees going on a mini run of 6 consecutive points.
The regular season wraps up tomorrow night at another very tough locale, Oakdale HS!
Scoring summary:
Hannah Miles, 12 points
Hannah Orens, 6
Natalie Voorhees, 6
Emma McCaskill, 6
Megan Degrouchy, 6
Brianna Shuttlewood, 5
Sascha Bravin, 3
Jadelyn Coleman, 2
Jordyn Keller, 2